Customise your new NMD or VS board!

Download the PDF to see all the options and prices.

Choose the template, core, tail and colours, fill in the form, email it to us.

We will confirm the price and order, then simply pick up your board in Bali.

We are super excited to announce that we can now offer HAND SHAPED custom boards for an extra RP1million!

See Below For Details!

If you would like your board hand-shaped by Dan Sivess or Nick Mesritz then please let us know! Instead of what stock shape you would like, we just need the following information:

Unlike previous Parabolic or curved version of our patented technology, the PFS3 high density aerospace foam beams run in a straight orientation from tail to nose. This gives the board more longitudinal flex right out of the box, without sacrificing the exceptional strength the PFS boards have become renown for.

The QuadConcave can be broken down into two parts:

NMD’s 2nd generation Parabolic Flex System™ now features a one piece 1.9lb Kinetic Core, integrated with Divinycell® vertical foam beams for increased strength while reducing overall board weight. The new PFS™ design still enables the outer rail profiles to flex at a different rate to that of the central core, allowing the rails to contort in the wave face for optimum edge control. The increased stiffness of the central core construction maintains a more streamlined profile for unrivalled down the line board speed. NMD Parabolic Flex System™ – the best of both worlds. Australian Patent No. 2011101093 – other regions Patent Pending.
PFS II comes standard with Surlyn slick, channels, nose bulbs, single stringer and mesh.

Based on our groundbreaking Parabolic Flex System technology, the ProRide™ range of boards feature our all-new Parabolic Base™ for revolutionary strength-to-weight performance allowing you to ride a thinner board without a loss in nose to tail stiffness. Parabolic Airex T90 high-density structural foam beams are embedded vertically into the base of the core for unrivalled flex-to-recoil energy transfer. Scientifically proven Vapor Tracks track water along the length of the beams creating a hydrodynamic effect through the center of the board for electric board speed.
ProRides comes standard with Surlyn slick, channels, nose bulbs, single stringer, mesh and signature deck contours.

Developed using cutting-edge expansion cell technology, NRG+ Core™ is a cool water core specifically formulated to meet key performance characteristics as demanded by our worldwide team of the sports elite riders. Now with the added strength of a 1/4” Kinetic PP deck underlay, NRG+ Core™ gives you an even better mix of flex, recoil, projection and pop.

Classic 45º angle on a 385º radius cut. Loose and responsive, Crescent Tails are the preferred tail shape of the NMD Pro Team. CNC cut for maximum precision.

The protruding bulb increases the boards planning surface at the tail area for down the line speed with wings that lock the tail in throughout the turn. Machine rounded for rider comfort. 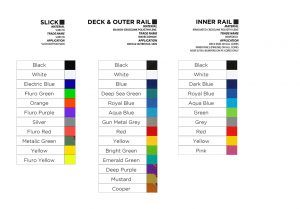 Please allow at least 2 weeks from the time of ordering (often it can be quicker so please ask us about delivery times).
Full payment to be made in rupiah.
Board delivery to your hotel in Bali can be arranged otherwise a mutually agreeable exchange location can be organised.